History of Exhibition in the World and Iran

The London World Exposition 1851 was the first world exhibition. It set standards that were hard to surpass. In the summer of 1851, the Crystal Palace by architect Joseph Paxton offered an impressive backdrop for the display of the products of almost all the important nations. The Crystal Palace's architecture represented an adaptation of the great British conservatories; it was characterized by its high halls, flooded with light, in which even the old stock of trees found room, and large machines in full operation could be displayed. The visitors who flocked to the exhibition from all over the world secured for the Royal Exhibition Commission a sizeable profit, with which the pre-eminence of the domestic industry could be increased even further.
In the spring months of 1851 the elaborate installations and decorations for the exhibits were completed, which took away a lot of the Crystal Palace's lightness. Furthermore, the more than one million exhibits had to be obtained and placed. The London press had raised expectations very high. The whole city was feverishly looking forward to the opening of the gates. Numerous handbooks and guides were offered by official distributors and street vendors. Even a trade in souvenirs with depictions of the Crystal Palace on all sorts of objects had been established. 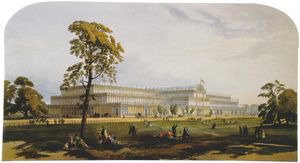 At the opening on 1 May 1851, the placement of exhibits was far from completed. But the festively decorated cross nave with its much admired crystal well in its middle offered an exalted backdrop for the festivities, which were staged in all Victorian pomp. The Queen herself, as can be gathered from her diary, was thoroughly impressed. 25,000 visitors filled the Crystal Palace's naves. On the opening, Prince Albert described the aim of the exhibition as "the fertile promotion of all branches of human diligence and the strengthening of the bonds of peace amongst all the nations of the earth." 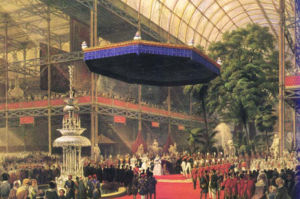 Some facts and figures about this exhibition are as follows:

- Official title: The Great Exhibition of the Works of Industry of All Nations
-Exhibition site: Hyde Park
-Area: 10.5 hectares, of which 7.2 hectares for the Crystal Palace
-Exhibition area: 8.7 hectares
-Duration: 1 May – 11 October 1851
-Exhibitors: 14,000 with over one million exhibits, 6,900 from England
-Foreign participants: from 25 countries and 15 British colonies
-Visitors: 6,039,205
-Entrance fees: variable, between one shilling and one pound
-Classification: 4 sections and 30 classes
The Paris World Exposition 1889 is the other famous and distinguished exhibition with the Eiffel Tower and the "Galerie des Machines", two of the most famous engineering constructions of the 19th Century were built at the same time for the fourth event. This may be the reason why this exhibition is regarded as the most prestigious world exhibition that has so far taken place. Admittedly, the Eiffel Tower served no useful purpose, but as a landmark for the exhibition and the French capital it fulfilled its function brilliantly. In the "Galerie des Machines", where a seemingly floating construction of iron girders bridged a prodigious span, visitors to the exhibition were able to enjoy a symphony of steam engines and electro- dynamos. Dances performed by groups from far-off, strange countries were also immensely popular. For the first time ever, the people of Europe were exposed on a massive scale to foreign cultures and foreign "worlds". 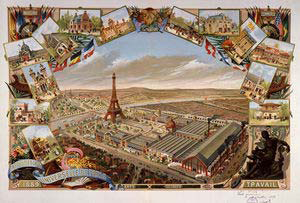 Another important event in exhibition history is foundation of UFI. UFI was founded in Milan, Italy, on 15 April 1925, by 20 leading European international trade fairs, namely: Bordeaux, Brussels, Budapest, Cologne, Danzig, Frankfurt/Main, Leipzig, Ljubljana, Lvov, Lyon, Milan, Nizhny Novgorod, Padua, Paris, Prague, Reichenberg, Utrecht, Valencia, Vienna and Zagreb.
UFI was established as a non-political international association in accordance with the French law of 1 July 1901 on associations. Initially, UFI was created under the name "Union des Foires Internationales" (UFI), or "Union of International Fairs" in English, or "Verband internationaler Messen" in German. The name change to "UFI", accompanied by the tagline "The Global Association of the Exhibition Industry" was decided upon by the General Meeting in Cairo, Egypt, on 20 October 2003. Increasingly an abbreviated name, "UFI", is used in contexts where the association is well known.

HISTORY OF EXHIBITIONS IN IRAN:

In Iran the most important event related to exhibitions in contemporary sense is participation of some traders in The London World Exposition 1851. Afterward in the year 1958 the first important event held in Iran was Italy industrial commodities exhibition.
Afterwards The permanent location of Iran International Exhibitions Co. (IIEC) in Tehran was established in 1965 and had been a member of the Union of International Exhibitions (UFI) since 1966. IIEC (dependent on Iran's Commerce Ministry) is a co-op company, and in April 18, 1999, the Bill of the company had been approved by the Parliament of the Islamic Republic of Iran and by the Guardian Council; according to Law 123 of Iran, the company became independent of the Export Development Center and had been active since Nov. 23, 1999. Company Duties:
Coordination and development of domestic and foreign exhibition works of the country
Centralization of work for establishing exhibitions and coordinating domestic and international activities for development of non-petro export
Introduction of industrial production, mineral, agricultural and trade services at domestic and international level
Cooperation with union of world exhibitions and acceptance of their membership
Participation and cooperation in seminars and related conferences

The permanent location of Iran International Exhibitions Co. is one of the most important commercial and economic centers of Iran with an atmosphere, facilities and exhibition area exclusively in the country, providing a desirable environment for holding special and international for Iranian and foreign businessmen. In addition to representing and demonstrating ability to do commerce exchange, they are able to capitalize in and expand a project of technical and international significance.